The tourist hotel complex (THC) Alpha in Moscow recently received a dramatic new façade wall-wash from Twenty First Light Ltd, a Russian manufacturer of LED luminaire solutions. With substantial product support from Taiwanese LED manufacturer SemiLEDs, Twenty First Light developed three types of saturated purple and warm white spotlights for the project to achieve both a powerful visual impact and high reliability for the distinctive lighting scheme.
“THC Alpha is a high profile landmark in Moscow, and as such, this was a high-exposure project for Twenty First Light that demanded a solution which would start out visually appealing, and then stay that way over the life of the installation,” commented Sergey Stakharny, Director of Twenty First Light “It was very important to us that the LED manufacturer both understood what we were trying to achieve, and would provide flexible support that minimized our engineering challenge while streamlining the project and maximized the reliability of the installed luminaires. SemiLEDs was able to meet those needs, contributing to the success of this program.” 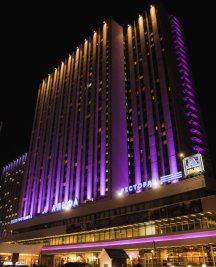 Twenty First Light tackled the project by developing three distinct types of luminaires, including 40W saturated purple spotlights for the individual balconies on the building’s side, as well as narrow-beam 100W purple and 70W warm white spotlights illuminating the building façade for a colour-fade effect from bottom to top. In addition, a series of prototype 150W RGB colour-changing spotlights, also based on SemiLEDs C35 LEDs, were developed to allow on-site testing of different hue and saturation effects. With the final selection being a saturated purple, Twenty First Light was able to optimize the performance and value by engineering a static combination of blue and red LEDs matching the specified and tested shade. The LEDs were surface mounted on a single aluminium array plate, and supplemented by secondary optics to achieve a 10-degree beam angle. The 100W purple and 70W warm-white spotlights respectively replaced 400W and 250W high pressure sodium lamps netting over 70% energy savings.

“We were very pleased to support Twenty First Light in the development of these customized luminaires constructed around SemiLEDs C35 family of LEDs,” commented Dr. Ilkan Cokgor, Executive VP of Sales and Marketing for SemiLEDs. “One big promise of LEDs is to enable the kind of design flexibility that Twenty First Light devised, allowing the end-specifier to see a dynamic test luminaire for colour selection, and then translating that into a cost-optimized, and highly reliable production solution set. That flexibility demands a wide product offering, robust technology, and a manufacturer that has the ability to interact with the luminaire designers with individualized support. It’s what distinguishes SemiLEDs as both a technology and solutions leader.”