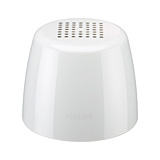 The ‘plug &play’ Philips CityTouch connector nodes plug into a standard socket, and connect automatically to the software when installed. Easy to set up, flexible enough to adapt with any LED street light from any manufacturer, and cost effective without the need to build a local network or reprogram individual luminaire controllers, the connector nodes enable the use of Philips’ CityTouch remote street light management software that delivers up to 70% reduction in energy consumption compared to conventional lighting technologies.

First launched in the North American market, the Philips CityTouch connector node is a retrofit technology that gets cities network-ready in minutes. Instead of spending months or even years on building a city-wide network installation, once plugged into a luminaire, the connector nodes automatically detect their location, connect the LED luminaire to the existing cellular network and start sending data to the back-end Philips CityTouch software. A light point automatically appears on the CityTouch map at the right location, the most important data is imported into the system, and with a few clicks you are ready to control the fixture through Philips CityTouch remote management software.

“At Philips we appreciate that lighting is fundamental to the Internet of Things, whether in the home, workplace or in cities. We are committed to further innovation of our CityTouch technology and continuing to create leading open systems,” said Jeff Cassis, Head of Global Systems at Philips Lighting. “We have already delivered this connected lighting solution to the city of Los Angeles, the first ever city in the world to install a retrofit technology that connects its existing LED street lights to Philips CityTouch software. We are also in discussions to further roll out CityTouch connector nodes across North America.”