Largest Mosque in Europe Fitted With LED Lighting Inside & Out 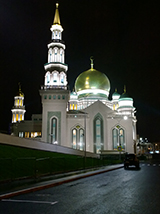 Philips Lighting, in collaboration with the projects department of JSC ‘Electrotechnical Company Eco Svet’, have illuminated the newly built Moscow Cathedral congregational mosque, which is the largest mosque in Europe. Philips experts developed a lighting design to highlight the intricate traditional Islamic design of a 6-story, 18,900 sq m building, its large dome and six prayer towers.

“A mosque is not just a sacred place for believers but also a part of urban architectural landscape. Thus its lighting plays both functional and aesthetic roles, – comments Marina Tyschenko, Vice President and Head of Philips Lighting in Russia and CIS. Philips LED solutions will make the Moscow congregational mosque truly stand out, revealing its architectural uniqueness and majesty”.

Over 750 energy efficient Vaya LED lights were used for the mosque’s decorative lighting. The connected LED fixtures can offer up to 80% energy and cost savings compared to conventional light sources. In those parts of the architectural complex that required more intense light – the dome and the crescent – experts installed ArenaVision lights: ten 400W luminaires and one 2000W projector. A Philips Color Kinetics-based lighting system underlines the traditional geometry of Islamic architecture with green light accents and will create numerous lighting scenes inside the mosque during religious holidays.

“Thousands of believers were expecting the opening of the Mosque for several years. It was essential to create a uniform and consistent look and feel of the complex, and lighting is one of its central elements, – says Alexander Sheiko, General Manager of JSC ‘Electrotechnical company Eco Svet’. The project has resulted in a reliable, energy efficient and durable lighting system that will create comfortable conditions for visitors and worshippers at the mosque and make it an organic part of the cityscape.”

“The Mosque will feature accent lighting and floodlighting both for façade architectural elements of the façade and towers, and internal zones and territories. For uniform lighting of the dome and façade that overlooks Durov Street, we had to mount a dual-use mast that was designed specifically for the project,”  adds Andrey Trofimov, Head of the projects department of JSC ‘Electrotechnical Company Eco Svet’.

The façade of the mosque is coated with natural light grey granite with dark green decorative elements. The Philips LED lighting will highlight the natural beauty of the materials using light with a 4000K colour temperature.